Of Ashes and Wind, a photo-book by Cesare Bedognè 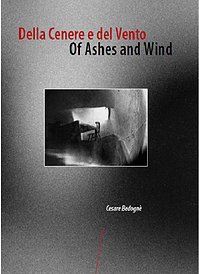 The book is distributed in Italy by Direct Books:

Old Baruch, with his white beard and gold-rim glasses, often told me: Words are not things, but their absence.

I would remain still, and in silence I’d watch him search through papers, place his thick fingers in a book, lick his finger and flip through the pages, take his glasses off, nod with his head, only once, before closing his eyes.

I always thought in that loft, filled with all the drafts that stole in from the mountains, old Baruch, with his white beard and gold-rim glasses, would have hidden some secret, many years before, perhaps inside the pages of a book, among the time-yellowed papers, or in the crease of dust, inside a feathered nest resting on some shelf. A secret that even he had then forgotten, along with where he had hidden it, and now he was trying to retrace his steps, passing all those hours, every day till darkness fell, whenever I went to see him, every time I went there, shuffling through those papers, taking off his glasses, dipping his finger in the inkwell of his mouth, before closing his eyes.

Words are not things, old Baruch kept repeating in those days, but their absence.

Those days, I smoked cigarettes without a filter. Better yet, I rolled them leisurely: I’d take tobacco from the pouch with Pueblo stamped on it, and I’d gently spread a pinch of it on a thin paper, squeeze the two ends between index and thumb, roll it and bring it to my mouth, lick one long edge with the tip of my tongue and run my fingers along the tobacco, as if trying to caress it. In stillness I’d smoke that cigarette, thick in the middle and thin at the ends; then I’d remain there absent-minded, staring at the smoke caught in the air, drawn out the window, outside that loft and its secret, before I’d close my eyes.

Those days, now and then I’d think about words and about things, about the absence of things, within the words themselves.

Then, once, I don’t remember precisely what day it was, when darkness had almost enveloped us, one of those days filled with cigarettes and smoke coiled in the air, old Baruch said that he wanted to show me something, something he had found, or better yet found again, among the piles of books, the tangle of faded and eaten away papers, in a corner of the loft. So that day, when all was darkness, I saw old Baruch take a thick candle and light it with a match, and then pull out, from where I have no idea, a heavy book with a dark brown leather binding, a thick cover with nothing written on it.


Old Baruch, his rim glasses and his thick white beard, wetting a finger on the tip of his tongue, opened the book and said to me: I have no idea how it ended up here, I don’t know where it came from or whose it is. I’ve called it The Book of Omens.

And so that day, that day of smoke yielding to darkness, in the light of a thick candle I picked up the book, and during the entire time I leafed through it, old Baruch remained in front of me; he had taken off his glasses and was now stroking his white beard, his eyes closed.

There were no words in the book, no sign that might indicate some form of writing. There were only images. Black and white photographs, to be exact, of things rising out of darkness, as if caught by a thin whisper of light, or better yet of smoke. Imperceptible powder that laid upon those objects, suspended in a space, where time did not exist, or had no place to call home.

At least that’s what it seemed, at first sight.

I took the book from the table where old Baruch had placed it, white beard and rim eyeglasses, I laid it on my knees and I bent over to leaf through it, more closely, barely wetting the index on the tip of my tongue.
So while flipping through the pages, I asked myself almost without thinking, like a smoke ring forms over your head, without meaning to, I asked myself that day what I was really looking at. I then closed the book and took from old Baruch’s table one of those yellowed sheets of paper, and without opening the book any more, I began writing on that sheet the things I had looked at and those I had seen when I looked, as I had turned one by one the pages of the book, stooped over my knees.

These, now that I think of it, now that I found again the sheet I wrote on that day, buried in the pages of a copy of Thomas Bernhard’s Correction, these are the things I saw, or rather only the words, only their absence:

These are the words.

I never thought I’d find these, really. I thought, going back to those days, old Baruch thoughtfully stroking his beard, his eyes closed, I thought I had simply written a list, a catalogue which today, after such a long time, could restore the vertigo of those photos, of that book. A vertigo which had not ceased even after I had closed it and put it back on the table. A vertigo, now I know for certain, which that day, only by the light of a candle, I had tried to conceal, to stem, by writing those words I thought were a list, a list which they are not.

In actual fact, there were no windows, broken panes, shadows on walls, stuffed birds, empty chairs or postcards hung on a string with clothes pins. All these things were indeed in the images of the book. But they were not those. Because even things are not the things themselves. And those were an absence, I don’t know for sure if of someone already gone, or of someone still to come, it doesn’t matter. Perhaps every image tries to capture, to imagine this absence, this something missing which exists outside of time itself, a time missed, just before something happens. Shortly after. That’s why every image can be an omen, a presage, able to contain a destiny, to reveal a mystery.

My list is not a list. As it was, my list turned into a vertigo. I listed those things in a row, I put words to them without understanding, and without thinking the things disappeared, what came out was their absence, what has remained and is still felt, on that sheet of paper slipped in the pages of Thomas Bernhard’s Correction, so long ago, I can’t imagine how long.

In the end, quite some time has gone by. Here I am, white beard and rim glasses. Today is again one of those days when darkness comes suddenly, beyond the courtyard the cyclamens are stirring, the hedge leaves tell me the wind has picked up. I no longer smoke, time for this has passed as well. I close my eyes and stay still, waiting; in the rising darkness I think back to old Baruch, his thick fingers the white beard, while he searches his hidden secret in the loft, an omen of those days long gone. Good old Baruch and I, we know where it is, but we don’t care to take it out, it wouldn’t be a secret anymore, would it.

We’d no longer feel its, their absence.

“We who draw
do so not only
to make something visible to others,
but also to accompany something invisible
to its incalculable destination.”